MAC address: used locally to get frame from one interface to another interface

ARP routing to another LAN

connectionless: no handshaking between sender and receiver

Wireless access point (AP) is physically connected to a router

basic service set (BSS): an AP and the hosts connected wirelessly to the AP

routing: determine route taken by packets from source to dest via routing algorithms

Example calculation at the sender:

Step 2: take 1’s complement of temp to get checksum

Step 3: put this in the header

Example calculation at the receiver:

L2 switches and hubs do not have IP addresses

Routers have multiple IP addresses, 1 or more for each physical interface

All IP addresses on the same link have a common portion in the most significant bits, known as network prefix.

Fixed number of networks and addresses per network

packet forwarding: relay packets from one physical interface to another by routers

Next hop calculated with destination address and routing table.

Many matches can occur in a routing table. In this case find the entry with longest prefix (smaller pool of possible destination IPs).

If router can reach:

solution 1: statically configure NAT to forward incoming requests at some port to the server

Transition from IPv4 to IPv6

global: all routers within autonomous system have complete topology

A set of routers under a single technical admin, using an interior gateway protocol and common metrics to route packets within the AS.

Uses exterior gateway protocol to route packets to other AS’s.

Identified by a 16-bit ID AS-number.

Each local iteration caused by:

Each node notifies neighbours only when its DV changes 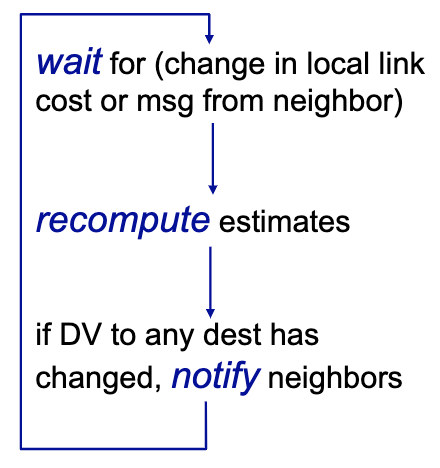 The algorithm can get stuck in a loop when node X goes down. Solutions:

Does not solve three-node or four-node instability.

Forwarding table configured by both intra AS and inter AS routing algorithms.

BGP provides each AS a means to:

Programs use port numbers to address other programs.

demultiplexing at receiver: use header info to deliver segments to correct socket

connectionless demultiplexing: UDP segment directed only based on dest address and port

Duplicate packets and acks will be discarded.

Sender can have up to N unacked packets in pipeline

Sequence number and ack number fields counted by # of bytes (not segments).

ack number: sequence # of next byte expected from other side

ACK for client-to-server data carried in data segment from server-to-client.

Ramp up is exponentially fast.

In CA, sender increases cwnd by 1 MSS when all segments in previous cwnd have been acked.